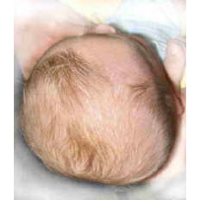 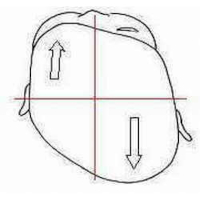 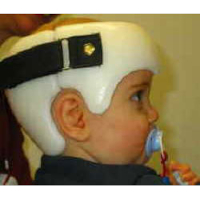 There are 3 images available for this product:

- premature ossification of the cranial sutures (craniosynostoses)
- position-related skull deformities (plagiocephaly)
The indication for an operative correction arises from possible neurological symptoms such as headaches, visual disturbances or accompanying developmental disorders or / and from the cosmetic conspicuous aspect that can lead to serious psychological symptoms in later life.

Definition: Craniosynostosis (early cranial suture closure)
The term craniosynostosis describes an early closure of the cranial sutures, which on the one hand lead to abnormal skull growth and thus to a skull deformity and on the other hand can lead to a developmental disorder of the child due to the resulting lack of space for the brain. Craniosynostosis is one of the congenital malformations and is already visible in childhood at the earliest. The extent of the skull deformity depends on the affected skull sutures, the time of their occurrence and the possible compensation of sutures that have not yet been closed. It can also lead to concomitant deformities of the facial skull.

Definition: plagiocephaly (non-synostotic head deformity)
Plagiocephaly is a widespread postnatal occiput asymmetry (positional flattening of the back of the head).
Since the 1990s, recommendations for supine positioning for babies have been made worldwide. This has led to an increased incidence of skull deformities. The most common abnormality is the back of the head, which is flattened on one side. Other external influences, e.g. B. the birth process, tightness in the womb in the case of multiple births, etc. can also lead to a skull deformity.
First, an attempt is made to achieve an improvement through repositioning and physiotherapeutic measures. In the case of very pronounced deformities (asymmetry of the forehead, facial asymmetry, displacement of the ears), a head prosthesis may be necessary for further treatment.

Before the age of 6 months, a head prosthesis should not be used, not around the neck and neck muscles to overwhelm. After the 12th month of life, the effect of a head prosthesis is less, as the cranial bone increases in strength. The ideal period for the therapy is between 6 and 12 months of age.

Treatment with a head orthosis:

If a head orthosis has been prescribed by the doctor, an exact model of the head must first be made. The plaster cast is subsequently processed in such a way that the skull is given adequate space for symmetrical growth. After a short period of getting used to it, the helmet is worn all day. As a rule, the helmet is tolerated very well by the children and does not cause any impairments. A fit check and, if necessary, readjustments are carried out at regular intervals.

The prices are available on request from the manufacturer / distributor.