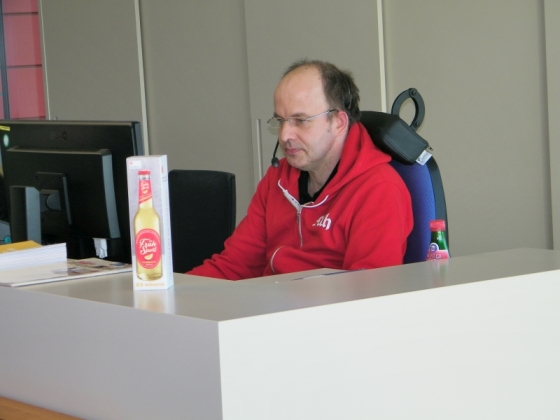 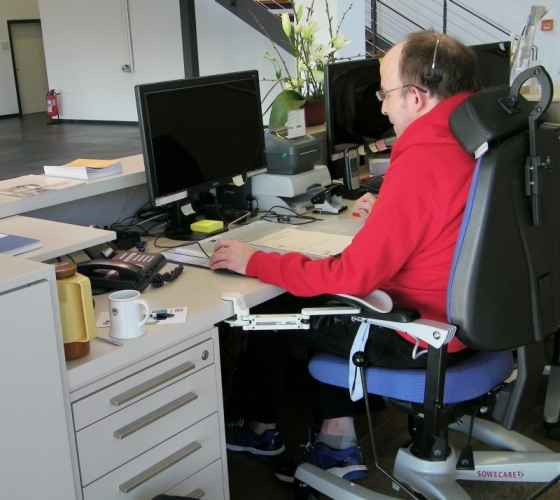 There are 2 images available for this case study:

The owner-managed company Cölner Hofbräu P. Josef Früh KG employs more than 400 people from around 30 nations, which at the same time reflect the composition of the clientele and emphasize the importance of lived diversity for the company. In addition to the brewery's core business, the company has also established itself in the fields of gastronomy, the hotel industry and beverage logistics. The topic of inclusion and / or the training and employment of people with disabilities is also part of the special commitment and corporate philosophy - for which the company was honored by the IHK Foundation for Training Ability and Skilled Workers as the "Opportunities Setter 2014" recruiting a jobseeker with a disability for administration.

"About the contact to co-work! In Cologne, we received the application and invited the applicant to the job interview. In the job interview, the applicant could score by his personality. Above all, the statement that he has a physical disability - no mental and just got a chance, has convinced us to try it first with an internship. After the internship, we then hired him because of his achievements and personality. In the context of the recruitment, it took a very long time until the responsible rehab carrier or the German pension insurance Association had approved the necessary support for the tools in the workplace and the driver's service for the transport of the severely handicapped employee. This has unnecessarily much time and some phone calls required, until then the German pension insurance federation had taken over their actual task. We would have liked to hire the employee faster - but we decided to keep the job clear for him until clarification."

The man had to be operated on after a severe herniated disc. The operation was unsuccessful and he subsequently had a spasticity and was dependent on the use of a wheelchair. Following the hospital, medical rehabilitation took place in a rehabilitation clinic. At the beginning of the rehab, he was still dependent on the wheelchair and could not wash and put on his own clothes. Today, he can walk with the help of a Gehschiene or orthosis and Unterarmgehstützen again short distances and is able to provide itself, with further motor limitations, such. B. especially when using the right hand and he is also physically low stress. To stabilize his condition, regularly visit the physiotherapy and occupational therapy. The degree of disability (GdB) is 60.

The man is a trained insurance salesman and worked for some time in his learned profession. Most recently, prior to his herniated disc, he was team leader at a telecommunications company. For this he had previously completed the necessary training, such as in the field of business English, IT and leadership. After that he was unemployed and was looked after by the job center and later by this to the expiring project MitArbeit! In Cologne, where, together with a job coach, perspectives for professional participation were developed. For example, there were weekly discussions, support for applications, support for cancellations and advice on financial problems. About work! In Cologne, the contact with the personnel manager of the company and the proposal of the jobseeking man as a suitable candidate who then sent his application documents to the company. After a job interview, he received an internship position in order acceptance for major customers. After the internship, he was initially limited and later hired on a part-time basis as an employee for the reception of the administration.

"The risks of the operation were known to me - you can not actually speak of a malpractice. Physically I have limitations - but my head is clear and unaffected. My employer recognized that and I'm glad to have a chance. The way to permanent employment has cost me a lot of energy and nerves, because the pension insurance to promote the tools and the driving service required a lot of time and documents and not everything went straight smoothly. But I'm glad that my current employer has kept to me and kept the job for me so long. Finally, away from unemployment benefits, so I can prove to myself and others that I can afford something despite my limitations."

The employee works in the entrance area at the reception of the administration (Fig. 1). His local workstation is equipped with an electric height adjustable office chair with headrest and additional parking brake and a forearm rest attached to the work table (Fig. 2). The parking brake can be operated via a longer lever and prevents slippage or driving away the office chair when setting and getting up. The forearm support on the left side reduces static holding work or stress caused by holding the body parts and supports the sequence of movements during VDU work. For example, at work, the employee places incoming calls and calls to the appropriate company contacts, forwards centrally incoming emails to the appropriate colleagues, enrolls visitors to colleagues, and is responsible for weekly formatting and routing of the lunch plan , For telephoning he uses a headset in conjunction with a telephone system that can be controlled via the PC. He uses a special small-field keyboard (compact keyboard) for left-handers and a left-hand ergonomic mouse - with these two tools, he also serves the usual software applications. The small field keyboard has a numeric keypad on the left as well as additional programmable keys for specific key combinations, which can then be triggered by pressing only one key.

The workstation in reception can be reached by the employee with the help of his walking aids at ground level and barrier-free from the short access path or parking lot of his driving service, via an automatically opening and closing door. The driver brings him to work every day and then picks him up again. In the beginning, the u. a. severely handicapped employees commute to work by public transport, which was not possible in the long run due to disability. For this reason, he requested the promotion of a driving service with the responsible rehab carrier or the German pension insurance association, which only after renewed medical opinion and objection to the rejection consented.

To reduce the workload, the employee works 20 hours a week on a part-time basis in the morning. So in the afternoon he can easily participate in the important physiotherapeutic and occupational therapies.

Promotion does not play a crucial role in the company when it comes to the inclusion of people with disabilities. For example, an integration allowance by the pension insurance could help to support participation in working life at the company. In addition, disability-friendly design was required to ensure accessibility and mobility for the employee. For this reason, for example, the necessary aids at the workplace were subsidized by the German Pension Insurance Association, which is responsible for rehabilitation. The German pension insurance association supports also with subsidies the achievement of the job with the help of a driving service - which took place only after renewed medical report and opposition to the refusal. The expiring project MitWerk! In Cologne supported the employee and employer on the way to inclusion. Cooperation! In Cologne is a regional project for the qualification, support and placement of unemployed people with a recognized disability.