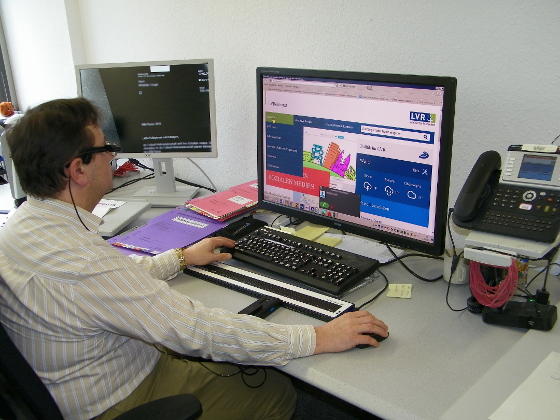 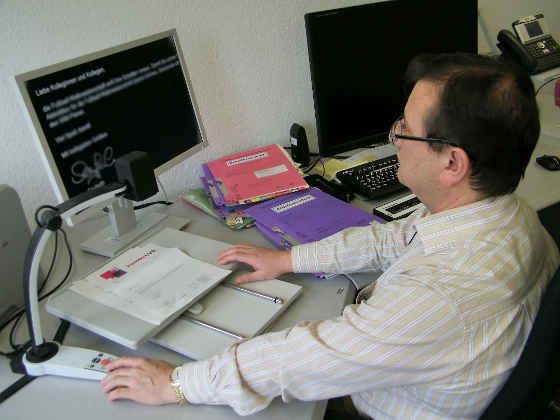 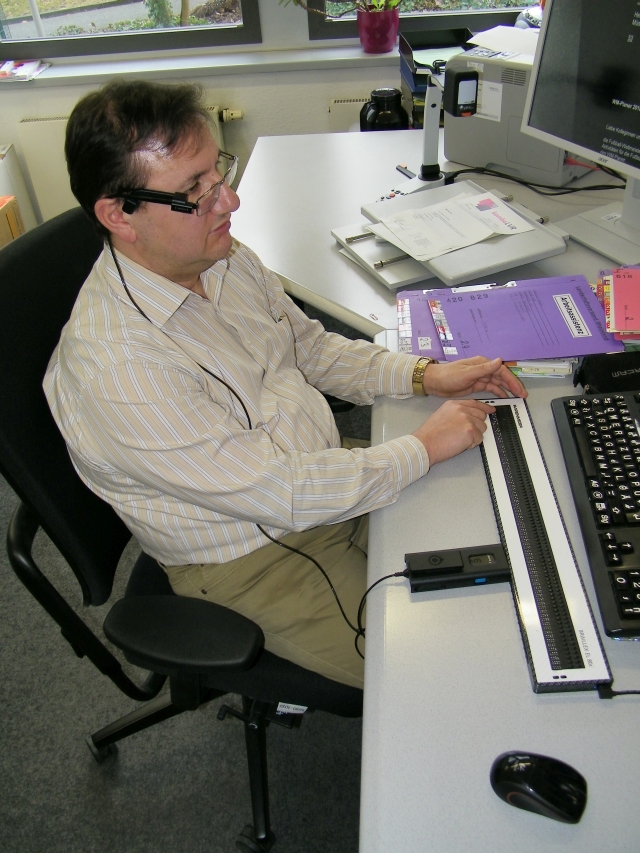 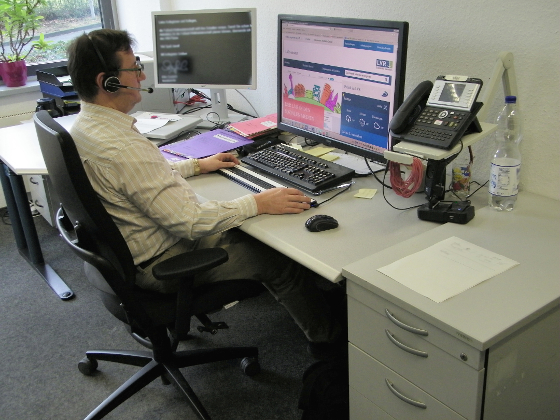 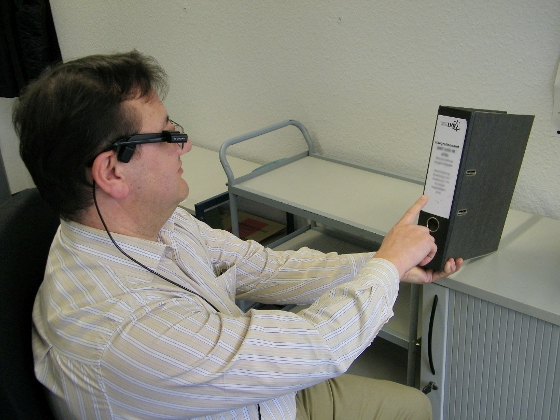 There are 5 images available for this case study:

The Landschaftsverband Rheinland (LVR) is a municipal association with around 19,000 employees and is based in Cologne. As part of the tasks of local self-government, the LVR is committed to an inclusive society, which is underlined by its mission statement "Quality for People". The administrative bodies of the LVR are divided into nine departments, of which the employee at the Inclusion Office is employed in Department 5 "Schools, Inclusion Office and Social Compensation".

The employee has a progressive retinal disease (retinitis pigmentosa) and is severely impaired in vision and severity. Due to the narrowed field of vision (so-called tunnel vision), an increased glare sensitivity as well as disturbances of the contrast vision his visual perception is limited. In recent years, the eyesight of the man has further deteriorated.

The man completed a training in metal technology and then worked for some years in a mechanical engineering company. During the recent time at the company it often happened that he stumbled upon objects that he did not recognize. Since he could no longer be employed in the company and became unemployed, he contacted the Employment Agency. The Employment Agency provides him with a career finding project in a vocational promotion agency (BFW). There he got to know different occupational fields and was informed in parallel for the first time about aids (large screens, magnification software, etc.) that can support him at work and in everyday life. At this time, however, his eyesight was still sufficient to work largely without aids. In the course of finding a job, it turned out that working at an office workplace is suitable for the man and corresponds to his inclinations. For example, at BFW he first started a special apprenticeship as an office doctor with appropriate training regulations for people with disabilities. He changed later, due to his good performance, in a usual training as an office clerk. After successfully completing the training, he took part in a BFW application training and applied to the LVR for administrative services. The man was hired after the successful job interview for the registry of the landscape association. Later, he began an employee training course - a training course that, upon successful completion, is equivalent to completion of an administrative assistant training. The employee has since worked as an accounting and accounting clerk at the LVR. As his eyesight continued to deteriorate, he again visited a BFW to attend a basic blind technical training. In this three-month training, he learned, for example, the Braille and blind aids know.

The clerk works on a computer workstation with ergonomic office furniture in the administration. His workplace is equipped with disabilities (Fig. 1): - a screen reader with a stage and a big screen - a mobile character reader - a PC with a big screen, a braille display and a large font contrast keyboard - a magnification software - a screen reader - a headset - a floor lamp with indirect light for better and glare-free illumination - venetian blinds for glare avoidance by incident daylight The case worker receives special templates with an associated file for his work, which have been developed by other colleagues in the department. These templates are linked to payments that have to be entered into corresponding masks in a program. Like his colleagues, he receives the orders and the files via the in-house courier service. With the aid of the screen reader, he can enlarge the documents in paper format on one of the two large screens and display them in higher contrast (Fig. 2). For the actual computer work on the PC, a magnification software is used, by which the optical content can be enlarged and displayed in higher contrast on the other large screen. For data entry, the man uses a large-format contrast keyboard, which he can operate blind as usual on the ten-finger system. For the daily font traffic and to avoid errors in the data entry, the employee can control his inputs tactile or audible. The optical screen contents of the PC can be tactually output via the Braille display using special software (screen reader) and read with the fingers or audibly read out via a headset (Figs. 3 and 4). Since his work involves a high proportion of reading activities, the clerk also uses a mobile character reader. In conjunction with the other aids for information output so a change of the sense or input channels is possible and prevents fatigue. The mobile character reader consists of the actual glasses of the clerk to the frame exactly a small reader, in the form of a special camera with strap for voice output, was attached. A cable connects the camera to the battery and minicomputer that can be worn on the body. The employee is able to read texts easily with the mobile character reader. For this he shows his finger on the text to be read while carrying the mobile character reader. The text is converted into speech in real time and forwarded directly to the ear via the clip attached to the auditory bone. For example, the clerk can quickly find a file to edit (Figure 5) - without having to use the swiveling and unwieldy camera of the screen reader - or read aloud letters (Figure 6) while moving in his office and, if necessary can do work in parallel. The mobile character reader also has the option to recognize faces and announce the corresponding name of the person. For this purpose, a register must be created in the memory of the minicomputer in which important names are programmed. If a registered person enters the office or encounters the employee in the corridor, the appropriate name is given. This option only works if the camera can capture a person's face from the front.

During a meeting or training, the clerk receives the corresponding documents before the appointment for viewing. So he can already prepare at his workplace with the tools and documents and save them on a tablet. During the event, he can then view the content zoomed in parallel on the tablet. If necessary, it is also possible to take the screen reader with you from your workstation, for example to be able to read texts from sheets with the aid of the swiveling camera. In this case, a corresponding screen must be present on site. If additional documents in paper format are used in the meeting or training that has not previously been stored on the tablet, he can also use the mobile character reader.

On the floor in the house a guidance system as well as contrast stripes on doors or their glass panes are present. The employee reaches his workplace by public transport and on foot.

The pension insurance funded career finding, vocational training or retraining, basic blind technical training and aids such as Braille display, screen reader and large-character contrast keyboard. The other aids were funded as part of the accompanying aids in working life (screen reader, large screen, mobile character reading device without glasses and floor lamp) from the local specialist office for people with disabilities in working life or the inclusion office. Advice on designing for disabled people was provided by the technical advice service of the Cologne Inclusion Office and the Rhineland Regional Council.

No information about funding available.