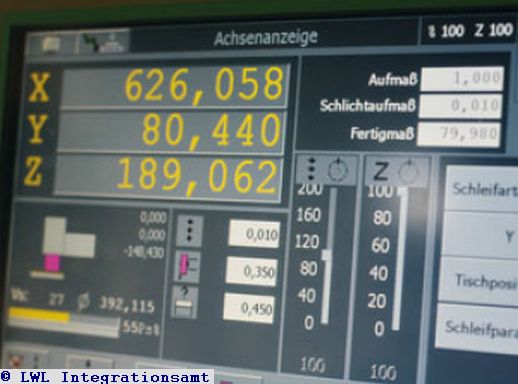 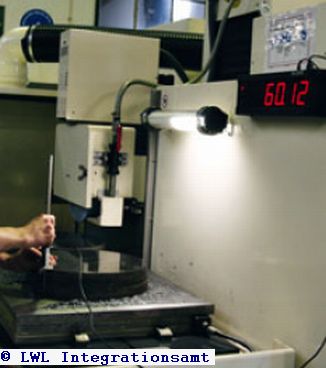 There are 2 images available for this case study:

The employer is a supplier to the automotive industry and aircraft, machinery and plant construction

The man has a visual impairment that is based on an eye condition. In the course of the disease, his eyesight has deteriorated over the years more and more. He can visual information, such as font or symbols, hearing is limited. After advice from a medical doctor or company doctor work it can not be used in production with his employer. The occupational medicine switched according to its opinion an integration service one, of the man at a vocational training center mediated to determine the functional impact of visual impairment for visually impaired and blind people. There, the aids were with him tried and tested to compensate for the visual disturbances

The toolmakers disability was due to a different department (tooling) was added. The offset or the selection of the new workplace was after a consultation between employers, employees and professional service engineer or specialist services for visually impaired and blind people the integration office. This workplace and work task, the disability-related impaired vision (skills), qualifications, work tasks and aspects of occupational safety have been specifically considered. The toolmaker was initially employed in the automatic machining of wheels manufacturing company. Because of his visual impairment he could not be used at this Workplace: At his new job in tool of employees working on a grinding machine. The manual dials with their low-contrast scales, however, were inadequate and could not be accurately read and adjusted by the employee. Together with the manufacturer of the grinding machine, therefore, a new digital display for a large screen was developed (Fig. 1), which represents large and high-contrast all the important dimensions. In addition, the employees took on measuring and the enlarged display of the determined with calipers actual dimensions a LED measurement display (Fig. 2), which is connected to the interface of the caliper. With the modifications of the employee is in a position in his new position at perform the grinding machine in tool without limitations