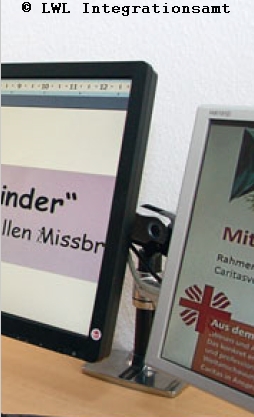 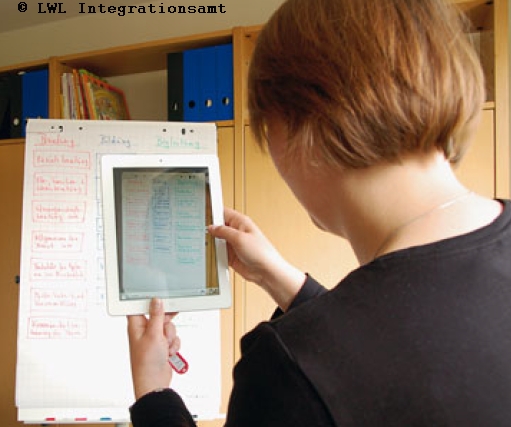 There are 3 images available for this case study:

The employer is a welfare organization in a city which supports the inhabitants preventively and accompanyingly and with social, health / moral danger and distress.

The woman has a visual impairment. It can only magnify optical information (e.g., writing) and perceive contrast.

The woman studied social work several years ago. During her studies, she used optical aids, such as a magnifying glasses, a hand-held magnifying glass, and a monocular, and the help of her fellow students, who, if necessary, were able to read the contents from the tablet. After completing her studies, she graduated from the Wohlfahrtsverband. During the recognition year, she was able to convince the welfare organization of her qualification, so that she subsequently became a social worker for psychosocial counseling. After a period of parental leave, she was further employed as a social worker for educational counseling. The employer offered or supported her her secondary education as a child and youth psychotherapist. As part of disability-friendly workplace design, the Integration Service (IFD) also recommended training on the use of tools and the use of useful shortcuts in a Vocational Training Center (BBW) for the blind and visually impaired.

The social worker advises parents and children with difficulties and problems in education. The focus is on prevention work, initial counseling and development as well as implementation of prevention courses. As part of her work she uses a PC and programs for word processing and presentation (Fig. 1). Your monitor workstation has been designed to compensate for visual limitations with: - a magnification software, - a cameral reading system (screen reader) with a large screen, - an uppercase contrast keyboard, - a large screen for the PC and - a monitor swivel arm with two arms for the two screens (Fig. 2) fitted. In addition, an ergonomic work table has been provided in order to be able to arrange the aids in the gripping and visual space. With the aid of the enlargement software, the social worker can enlarge the contents on the large screen of the PC, which can be positioned at the optimum viewing distance via one arm of the monitor swivel arm, and display them in higher contrast. The camera reading system used has a mechanical stage for precise positioning of the originals. The camera head is rotatable and can be quickly adapted to the different templates (up and down). The social worker uses the camera system to enlarge the contents of paper-based documents on the second large screen or to fill in documents. For input and operation of magnification software and camera system she uses a mouse and a large font contrast keyboard. By using shortcuts on the keyboard, the social worker can often do without the use of mice and thus does not have to move the mouse pointer into the menus and visually capture the process - which also makes working easier for them. The second large screen for the camera reading system can also be positioned over the other arm of the monitor swivel arm at the optimum viewing distance. To enlarge the information of templates that can not be enlarged or only very cumbersome with the help of the camera system, she uses a tablet. It is easy to transport and therefore can be taken along well for meetings or training. So it becomes possible certain contents, such. For example, you can save presentations to the tablet beforehand to zoom in on them during the event, or take a photo of flipcharts during meetings, and then zoom in on the photos or content (Figure 3). The social worker is very satisfied with the disability-friendly design of her workplace and the advice provided by the IFD for blind and partially sighted people.